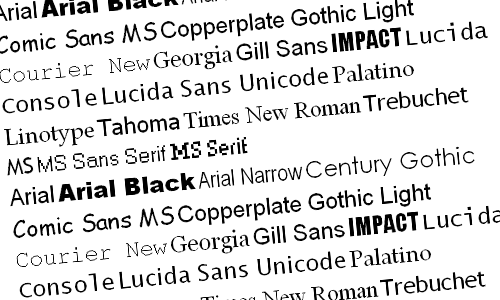 When the Internet took its first steps into the world, the standard for websites was basic black text aligned to the left and positioned over a light grey background. Links tended to follow the same pattern as today – links in blue, visited links in purple and all links underlined. Hardly a thrill-ride, but seriously advanced and impressive at the time.

It’s almost impossible to imagine web design where there were any visual limitations whatsoever – especially those concerning aspects as simple as fonts. But just as with all elements of web design, fonts have evolved massively over the years.

Back at the origins of the web, it was Courier that set the standard and burst onto the scene. Having first been the standard for typewriters and subsequently keyboards, it was only natural for the Courier font to go on to debut on the web with its simple, understated and very slightly ‘techy’ feel to it. Not that it made websites look anything other than dull, but they always say the first step is the most important.

Boasting a taller stature and serifs, Times New Roman came along as an exponentially more sophisticated web font just a couple of years later. Internet Explorer, Netscape Navigator (remember that one?) and plenty of other browsers began using this font as standard, making content both easier to read and more impressive presentation-wise. This was also about the same time the white background first began appearing.

The mass exodus away from Times New Roman in favour of Arial happened pretty quickly, taking over as the new web standard worldwide. It was the scalability of the font that made it such a huge hit, along with its clean, crisp and relatively elegant overall appearance.

One of the reasons why Verdana would then go on to become a web staple was the way in which it was still clearly legible when shrunk down to a very small size. This in turn made it ideal for those looking to squeeze as much as possible into every page, or make the most of limited-size banners, navigation menus and so on.

Verdana found itself sharing the stage with Tahoma to a certain extent, which gained massive traction after becoming the standard font used by Microsoft for both Windows and Hotmail. Even today, it remains the font of choice for some pretty huge sites and services – one of which being Facebook.

The rise of Trebuchet – a comparatively hip and trendy font – can be credited largely to the fact that PC and laptop screens suddenly started getting A LOT bigger. There was largely no need for tiny fonts anymore, given the additional display real estate available.

Last but not least, Georgia took over with a convincing lead as the font of choice for millions of websites – its use with WordPress having guaranteed it fame and fortune. Often referred to as the big brother of Times New Roman, it’s even made it to the likes of the New York Times website, having been noted for its superb readability and elegance.

The fonts we refer to above are often referred to as ‘web safe’ fonts as they are standard fonts that form the “font kit” in most people’s computers and therefore can be loaded easily form a user’s library. Before 2000 you could only really use these 6 fonts on your website! Pretty boring! Now with the help of various developments in font kits we can use practically any font we want by embedding them onto the website’s server. These fonts may take a little longer to load, but on the plus side it means web design does not have to be restricted by fonts anymore.